For English information, please see below. 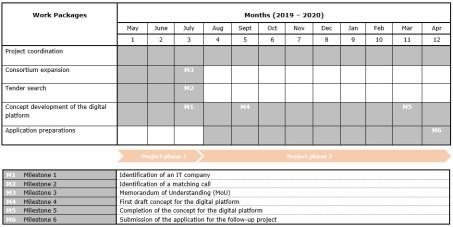 Information on the project EuDIQuAM

EuDIQuAM (Towards a European Digital Infrastructure for Quality Assurance in Personalized Mental Health Care) is a research project that builds upon the results of the preceding project DAQUMECA (Development and Implementation of Quality Indicators for Mental Healthcare in the Danube Region), in which quality indicators for mental disorders were developed and implemented in countries of the Danube region. [1][2]

EuDIQuAM is funded by the BMBF (German Federal Ministry of Education and Research) from May 2019 until presumably April 2020 with a total budget of 110,000 € (funding number: 01DS19032). The official project taker is Heinrich-Heine-University Düsseldorf, represented by the University Hospital Düsseldorf. The project is being carried out by the LVR-Klinikum Düsseldorf (project leader: Univ.-Prof. Dr. med. Wolfgang Gaebel).

During project phase 1 (months 1-3), the original consortium consisting of four partner countries (Bulgaria, Serbia, Czech Republic, Hungary) was expanded by two additional partner countries (Lithuania and Slovakia) followed by the signature of a Memorandum of Understanding (MoU) by all project partners. In addition to the country partners, a representative of the WHO Regional Office for Europe based in Copenhagen (Denmark) is member of the consortium.

The aim of the project is to develop a concept for a digital service platform for strengthening person-centred mental health care. It will help guide patients and their relatives through the mental health system to the right treatment center and will provide health professionals with information and supporting materials on mental health care. The platform will also comprise a database of quality indicators developed in the previous project DAQUMECA and will support reform processes in the partner countries. For the development of a concept of the digital platform, an IT company was selected in project phase 1. In cooperation with the IT company, a rough concept of the platform has already been developed. Currently, the team is working on a detailed concept of the platform.

The result of the final conceptualization of the digital platform will be used for the application of a follow-up project, in which the digital platform will be realized and implemented in 4 of the 6 partner countries. For this purpose, a suitable call for proposals was identified at the beginning of the project, for which a European grant application will be prepared in project phase 2 (months 4-12), together with the original and extended country group of the consortium. The application is a two-stage procedure and takes place within the framework of the EU subsidy program for research and innovation "Horizon 2020". For the first stage of the application, a short proposal for a project EUDIMEN (European Digital Integration of People-Centred Mental Health and Care) has already been submitted to the European Commission in September 2019. In case of application approval, a full proposal will be submitted in April 2020.
During the preparations for the first application round, a consortium consisting of 14 partners from 11 countries has already been formed for the EUDIMEN project, including partners from Germany, Belgium, Bulgaria, Lithuania, Netherlands, Poland, Serbia, Slovakia, Czech Republic, Hungary and USA. Additionally, a scientific advisory board of multidisciplinary experts has been established which will support the consortium during the project duration.